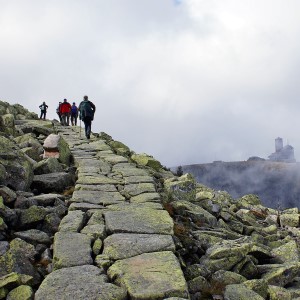 DAY 3 – Transfer out of Wroclaw to Karpacz – mountain resort in Karkonosze Mountains, part of Sudety mountain range. On the way stops at Jawor and Świdnica to see Churches of Peace listed on UNESCO Heritage List. The unusual shape of the churches comes from the limitations the Lutherans had to observe: the building could not resemble a traditional Christian temple, could not be constructed of long–lasting materials as brick or stone, could not have towers or bells. Additionally they had to be located outside the city walls but close enough to be reached by a cannon shoot. Time limit to accomplish construction was one year. Arrival and overnight in Karpacz.

DAY 4 – Day for trekking in Karkonosze Mountains starting from Karpacz. Recommended route with stop at the Wang Temple – a wooden church constructed in Norway in the 13th century, brought here in 1841 by Frederick Wilhelm. The most precious, original elements are made of Norwegian pine and contain characteristic Viking ornaments. Further on trekking to the summit of Kopa to admire the beautiful panorama of Karkonosze Mountains. Stop for a lunch at a mountain shelter. The descent by chairlift to Karpacz or walk down to admire beautiful wild nature. Overnight in Karpacz.

DAY 5 – Transfer to Boleslawiec – famous for pottery production. Visit at the pottery museum of Bolesławiec; during the visit, all stages of production will be presented, so that the visitors can have a closer look at how the ceramics are made. Pottery workshop – with the help of the four elements: clay, water, fire and air, you will be able to create your own, unique stoneware vessel. Continue to Wrocław with a stop at Książ Castle – the 13th century fortress of the Piast Dukes and the seat of Von Hochberg family since the 16th century. Tsar Nicolai II of Russia and Winston Churchill were guests here.  On the route we will additionally see Ślęża Mountain – the site of an ancient Slavonic pagan cult, with preserved sculptures dating back to 1300– 400 BC. Overnight in Wroclaw.

DAY 6 – A day for below visits / attractions in Wroclaw to choose from, according to group’s interests:

DAY 1 – Arrival in Wrocław. Evening walk in Old Town area to see the nightlife of the city known as the city of young people. Overnight in Wrocław.

DAY 2 – The tour of  Wroclaw – the city on the Odra River with 127 bridges and 14 islands. In over a thousand years of history, Wroclaw has had 50 variants of its name at the crossroads of Polish, Czech, Austrian, German, Jewish and Ukrainian cultures. We will see the Old Town & Ostrów Tumski, stop at Wrocław University with its ornate Baroque Aula Leopoldina, constructed in the 18th century, bedecked with paintings, sculpture, and gold-plated stuccoes. Transfer to see Water Tower in Borek District of Wroclaw – one of the most beautiful towers in the city, the synthesis of historical architecture with Art Nouveau style. In the afternoon, meeting with Polish youth at one of the high schools or universities –depending on the participants’ age. In the evening, time for socialising at one of the student clubs (e.g. Katakumby, Bajer). Overnight in Wrocław.