The Polish Art Nouveau was part of an international Art Nouveau style and was most popular during 1890 -1910. In Poland it is characterized by a mixture of different European influences and trends mostly with the floral and organic motifs blended with patriotic and national elements. Greatest Polish Art Nouveau architects include Tadeusz Stryjeński, Franciszek Mączyński, Ludwik Wojtyczko, Sławomir Odrzywlski, Roumald Miller, Wiktor Miarczyński 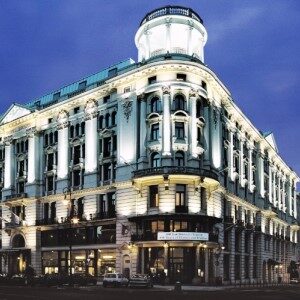 and Beniamin Torbe. There are several interesting examples of this style in Kraków, Łódź, Wrocław, Poznań and Bydgoszcz which were the main centres of Art Nouveau buildings. Below we have selected a few pearls of Art Nouveau style that can be seen on the most popular tourist route between Warsaw and Krakow.

Only few individual buildings and decorative elements of Art Nouveau style survived in Warsaw as result of war. However this was not the only reason. The style was no longer fashionable before 1914. It became a synonym of bad artistic taste and many of Art Nouveau facades were completely rebuilt and interiors disappeared. Also, the few that survived the German Nazi razing of the city were considered by the communist authorities decadent and were destroyed. Surprisingly, some architectural gems of Art Nouveau style can still be admired in Warsaw today.

Built in 1906 and designed by Gustaw Landau-Gutenteger. It is one of the best-preserved examples of examples of Art Nouveau architecture in Poland although it has not retained its original form to this day. It survived the WWII without major damage but its impressive dome above the main entrance was dismantled during the Polish People’s Republic.          The most characteristic Art Nouveau elements of the old bank are the maple-leaf floor, barriers decorated with floral motifs, stucco around the windows, furniture and panelling.

Wonderfully restored Art Nouveau hotel. Constructed from 1899-1900 on the site of the Tarnowski Palace and designed by Tadeusz Stryjeński and Franciszek Mączyński who won the competition with their Art Nouveau design. However the builders decided to change the style to a Neo-Renaissance design, and brought in architect Władysław Marconi to design the final hotel. Some of its interiors, including Malinowa Room, were designed by the noted Viennese architect Otto Wagner Junior.

Built in the years 1903-1913 according to Antoni Jabłoński-Jasieńczyk’s design. Constructed with the use of innovative building techniques qualified as early modernist with Art Nouveau decor. The Art Nouveau line smoothness is present in the cast iron balustrade in the interior of the building. External ornaments relate to geometric nature of the Viennese Secession.

The large bronze statue of Frederic Chopin designed in 1907 by Wacław Szymanowski to commemorate the centenary of Chopin’s birth in 1910. Finally cast and erected in 1926 due to the tsar ban for putting up monuments in Poland. This impressive masterpiece located in Royal Łazienki Park is believed to be the world’s largest monument in Art Nouveau style.

Powązki is one of the oldest cemeteries of Warsaw and an open-air sculpture museum in all architectural styles including Art Nouveau. Wacław Szymanowski tombstone was created by his son, Wacław Szymanowski, the author of the Frederic Chopin monument. The composition is cast in bronze and depicts two weeping women in long robes with the image of the deceased, giving an impression they are floating in the wind.

The museum is a restored Art Nouveau building from the early 20th century, located in the Old Town and housing the biggest collection of Art Nouveau in Poland including furniture, sculptures, paintings, pottery, sets of glass, silver, jewellery, costumes and accessories. Over the years, about 14,500 objects have been assembled in the Art Department, of which over 5,500 are Art Nouveau and 601 Neo-Secession. The collection from the 1920s and 1930s, including art deco, has over 1000 items.

Łódź is famous for its Art Nouveau style which developed in architecture around the turn of the 20th century and flourished until 1914. The city was inhabited by distinguished and creative artists. The Art Nouveau style was represented in beautifully painted glass, the staircases of tenement houses and ornamental facades of the villas, apartment houses and governmental buildings. Łódź houses the world-famous Modern Art Museum.

The most beautiful street in Poland with fine examples of Art Nouveau in various shapes. Although not all fronts of tenement houses are renovated they are real gems decorated with sculptures and frescos.

The Art Nouveau house in 100 Piotrkowska Street is an example of light form and stylistic elegance with fine ornamentation and artistic, hand-wrought balustrades.

Leopold Kindermann’s family villa located in Wólczańska Street in Łódź is the most beautiful example of the Art Nouveau decorative style in Poland. It was designed by Gustaw Landau Gutenteger – one of the main promoters of the Art Nouveau style in this country. It is built in the Berliner style and encrusted with floral and figural motifs. The body of the villa is asymmetric and stained-glass windows of various shapes are surrounded by floral décor. At present, it houses the City Art Gallery with collections of contemporary Polish arts.

Designed by architect Gustaw Landau-Gutenteger and built in 1905 for Alwina and Gustaw Schicht. The seemingly traditional form of the building is diversified by numerous decorative motifs: geometric and plant elements, masks of people and animals and triple windows of semi-circle shape at the top of the tenement house.

Kraków was the centre of the Polish Art Nouveau style with Stanisław Wyspiański as the main Art Nouveau artist in Poland. His paintings, stained glass and theatrical designs can be admired in the National Museum in Krakow.

Stained glass window “God the Father” was design by Stanisław Wyspiański in 1897 and is one of his finest works. It was inspired by the frescos of Michelangelo from the Sistine Chapel. It presents God as an old man with long hair and a flowing beard at the moment of creating the world. He holds his left hand over his head and the right hand points to the Earth. Stained glass window with dimensions of 846 x 390 cm was placed in 1904 over the main entrance to the Franciscan church in Kraków. Different colours dominate in the stained glass depending on the time of the day and the sunlight.

House under the Globe was built between 1904-1906 and designed by Tadeusz Stryjeński and Franciszek Mączyński as the seat of the Cracow Chamber of Commerce and Industry. It is a two-story brick building with a corner clock tower covered with a high dome of a pyramidal shape topped with an openwork globe. The sculptural decor of the portal above the entrance to the building was made by Konstanty Laszczka. The Meeting Chamber inside the building, designed by Józef Mehoffer is one of the most magnificent interiors of the Art Nouveau period in Krakow. At present it is the seat of the Literary Press.

Art Nouveau building of the Palace of Fine Arts – the seat of the Friends of the Fine Arts Society is located on Plac Szczepański and was built in 1901 according to Franciszek Mączyński’s design.  The frieze around the building presenting an artist’s changing fortunes was designed by Jacek Malczewski, called the “Father of Polish Symbolism”. Today the Palace of the Arts is one of the most prestigious exhibitions spaces in Krakow.

Rebuilt in 1903 – 1906 according to the design of Tadeusz Stryjeński and Franciszek Mączyński.  This corner tenement house with a strongly protruding cornice is the first Art Nouveau building with such a strong architectural expression. The art nouveau exterior was designed by sculptor Józef Gardecki, and the reconstruction was finished in 1906. In cooperation with Stanisław Getter he also decorated the walls of the facade with an allegorical frieze with floral motifs.

Built in the years 1905-1906 according to the design of Sławomir Odrzywolski. It is considered one of the best examples of Art Nouveau architecture in Krakow. The asymmetrical facade is enlivened in the right part by a loggia with a balcony and the left part is topped with a trapezoidal gable. The sculptural decoration of the facade was made by Jan Raszka.